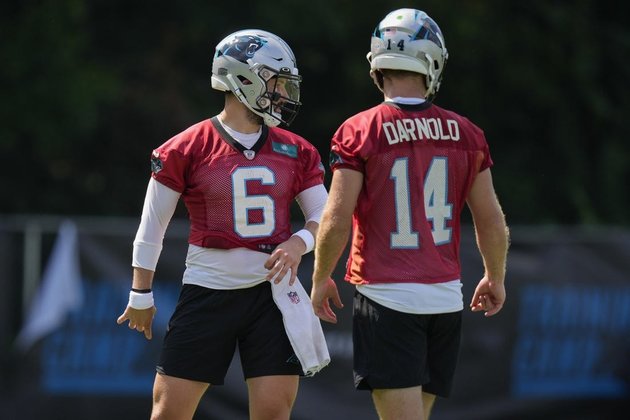 Carolina Panthers head coach Matt Rhule seems to be a few weeks from deciding whether it will be Sam Darnold or Baker Mayfield taking the snaps in Week 1 against the Cleveland Browns.

Rhule told reporters Saturday that he intends to review the quarterbacks at least until after two joint practices with the Patriots and the Aug. 19 preseason game against New England in Foxborough, Mass.

But that doesn't mean Rhule is committed to naming a starter the following day, either.

"I'm not putting a timetable on the quarterback position until after we get back from the Patriots week," Rhule said Saturday after both quarterbacks took part in a scrimmage. "The Patriots week is a true litmus test for us. That will really show us where guys are."

Neither Darnold nor Mayfield achieved separation on Saturday, apparently. Rhule said he saw positives from both quarterbacks in the scrimmage, but he remembered the negative, too.

"The disappointing thing is each guy had an interception," Rhule said. "We've got to protect the football."

Darnold opened the 2021 season as the Panthers starting quarterback, aiming for a fresh start after the New York Jets decided to part ways with him and traded him to the Panthers.

The two quarterbacks will be forever linked. Mayfield was the No. 1 overall pick in the 2018 NFL Draft, while Darnold was selected third overall.

Five quarterbacks were taken in the first round with the addition of Josh Allen (No. 7, Buffalo Bills), Josh Rosen (No. 10, Arizona Cardinals) and Lamar Jackson (No. 32, Baltimore Ravens).