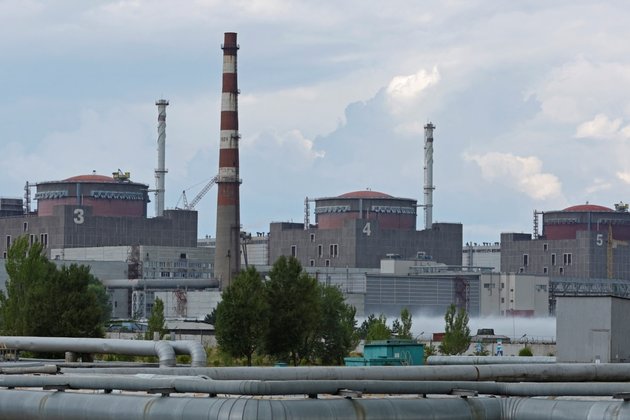 Three more ships carrying thousands of tons of corn left Ukrainian ports Friday, part of a grain deal between Kyiv and Moscow, as the two countries accused each other of damaging a major Ukrainian nuclear power plant.

'Three strikes were recorded on the site of the plant, near one of the power blocks where the nuclear reactor is located,' Energoatom said in a statement.

It said there were no signs that the damage had caused a radioactive leak.

'Ukrainian armed units carried out three artillery strikes on the territory of the Zaporizhzhia nuclear power plant and the city of Enerhodar,' the ministry said in a statement.

'Fortunately, the Ukrainian shells did not hit the oil and fuel facility and the oxygen plant nearby, thus avoiding a larger fire and a possible radiation accident,' it said.

Russian troops have occupied the plant in southern Ukraine since March.

U.S. Secretary of State Antony Blinken accused Russia on Monday of using the plant as a shield for its forces.

An official with the Russian-backed administration in Enerhodar said earlier this week that Ukrainian forces had repeatedly attacked the plant, according to Reuters.

Ukrainian President Volodymyr Zelenskyy said in his daily video address on Friday that Russia was committing acts of 'nuclear terrorism.'

'Russia must take responsibility for the very fact of creating a threat to a nuclear plant,' he said.

The Malta-flagged bulk carrier M/V Rojen, carrying tons of corn, leaves the Ukrainian port of Chornomorsk, before heading to Teesport in the United Kingdom, Aug. 5, 2022, amid the Russian invasion of Ukraine.

Three more ships carrying thousands of metric tons of corn left Ukrainian ports Friday in a sign that a deal to allow exports of Ukrainian grain, held up since Russia's invasion of its neighbor in February, is starting to work.

The ships departed for Ireland, the United Kingdom and Turkey. Another ship, the Razoni, left Ukraine on Monday for Lebanon, carrying the first grain shipment through the Black Sea since the start of the war.

In New York on Friday, U.N. spokesperson Stephane Dujarric said another ship was headed toward the Ukrainian port of Chornomorsk to pick up a grain shipment.

The U.N. and Turkey recently brokered a deal, the Black Sea Grain Initiative, aimed at enabling Ukraine to export about 22 million metric tons of grain currently stuck in silos and port storage facilities. The deal is meant to ease a global food crisis marked by soaring prices and food shortages in some regions.

Ukraine and Russia are key global suppliers of the wheat, corn, barley and sunflower oil that millions of people in Africa, the Middle East and parts of Asia rely on for survival.

In another hopeful sign, Taras Vysotsky, Ukraine's first deputy minister of agriculture, said the country could start exporting wheat from this year's harvest through its seaports as early as next month. According to Reuters, Vysotsky said Ukraine hoped in several months to increase shipments of grain through the route from 1 million metric tons expected this month to between 3 million and 3.5 million metric tons per month.

The initiative will run for a 120 day-period that ends in late November.

A backlog of nearly 30 ships that have been stranded in Ukraine's southern ports because of the war has entered its sixth month. The Joint Coordination Center, or JCC, a body set up under the Black Sea Grain Initiative, says the ships need to move out so other ships can enter the ports and collect food for transport to world markets.

The crews and cargo of the vessels that set sail Friday will undergo checks at the JCC inspection area in Turkey's territorial waters before moving on toward their destinations.

The JCC says that based on its experience with the first ship that sailed Monday, it is now testing moving multiple ships in the safe corridor, both outbound and inbound.

Meanwhile, Turkish President Recep Tayyip Erdogan visited Russia on Friday for talks with President Vladimir Putin that included the grain deal, prospects for talks on ending hostilities in Ukraine, and the situation in Syria.

In a statement issued at the conclusion of the talks in Sochi, which lasted four hours, Putin and Erdogan emphasized 'the necessity of a complete fulfillment' of the grain deal.

They also said that 'sincere, frank and trusting ties between Russia and Turkey' are important to global stability.

In other developments Friday, the Biden administration prepared its next security assistance package for Ukraine. Reuters reported that the package was expected to be worth $1 billion, one of the largest U.S. military aid packages to Ukraine to date.

The report 'unfortunately tries to amnesty the terrorist state and shift the responsibility from the aggressor to the victim,' Zelenskyy said. 'There cannot be, even hypothetically, any condition under which any Russian attack on Ukraine becomes justified. Aggression against our state is unprovoked, invasive and openly terroristic.'

The head of Amnesty International's Ukrainian office, Oksana Pokalchuk, also took issue with the report. In posts on Facebook on Thursday, she said the Ukrainian office 'was not involved in the preparation or writing' of the report and tried to prevent the material from being published.

Amnesty International said its researchers investigated Russian strikes in Ukraine between April and July in the Kharkiv, Donbas and Mykolaiv regions. The organization said its 'researchers found evidence of Ukrainian forces launching strikes from within populated residential areas as well as basing themselves in civilian buildings in 19 towns and villages in the regions.'

Some information for this report came from Reuters and Agence France-Presse.