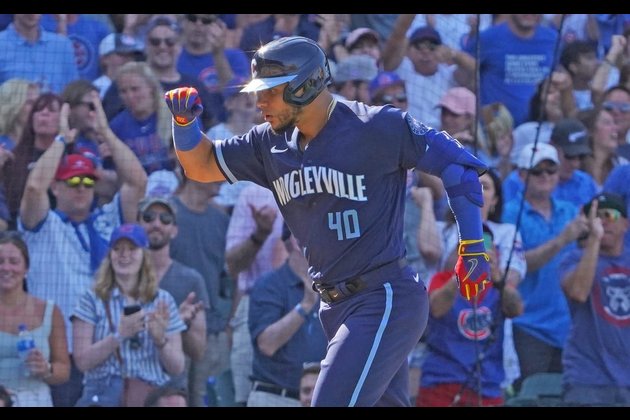 Cubs catcher Willson Contreras was unsure if he would still be playing home games in Chicago as the trade deadline approached on Tuesday.

The emotion Contreras showed on Friday upon socking go-ahead homer for the Cubs was evident.

After enjoying a clutch hit in a game he might not have been expecting to play, Contreras and the Cubs seek their fifth straight home win on Saturday afternoon when they oppose the scuffling Miami Marlins.

"I just wanted it to be over, even if I get traded or not," Contreras said. "I wanted to be somewhere that I can play baseball. It didn't happen. It's over. I'm still here, and now I feel relaxed."

Contreras went 5-for-26 on Chicago's seven-game road trip after his emotional reaction to the fans on July 26. Those in attendance at Wrigley Field that day were anticipating it to be their last chance to see the three-time All-Star and pending free agent in person before he joined former teammates Anthony Rizzo, Javier Baez and Kris Bryant as ex-Cubs.

Instead Contreras stayed put, received a warm reaction on Friday afternoon and then delivered a two-run blast in the eighth inning, leading the Cubs to a 2-1 victory. The Chicago offense managed only four hits on the day.

"That was amazing," Contreras said. "I was looking forward to doing something special right there."

Miami manager Don Mattingly said of Contreras, "He's dangerous, he's been swinging the bat good. When you're in a (game) this close, one pitch changes the game."

Besides trying to avoid allowing Contreras to beat them again, the Marlins are trying to find any kind of offense.

Since getting within two games under .500 on July 14, the Marlins have dropped 13 of 18 while seeing lineup regulars Jazz Chisholm Jr., Brian Anderson and Jorge Soler land on the injured list.

On Friday, Miami got seven hits but only one run, on a RBI single by Joey Wendle in the seventh inning. The Marlins struck out 13 times, marking the seventh time in the 18-game skid they fanned at least 10 times.

Like Contreras, Miami right-hander Pablo Lopez (7-6, 3.41 ERA) was rumored to be dealt as teams such as the New York Yankees showed interest. Instead he remained a Marlin and is hoping to rebound from one of the worst outings of his career.

On Sunday, Lopez faced the New York Mets and was tagged for six runs and a career-high 12 hits in 2 2/3 innings in a 9-3 loss. It marked the eighth time the right-hander allowed at least six runs and the second time this season.

Lopez is 1-2 with a 7.36 ERA in his past three starts but is hoping to continue his success against the Cubs, against whom he is 1-1 with a 1.50 ERA in two career starts.

The left-hander continued his struggles when he allowed a season-high five runs along with seven hits in four innings of a 5-4 loss at San Francisco on July 30.

Smyly is 3-1 with a 3.04 ERA in five career appearances (four starts) against the Marlins.