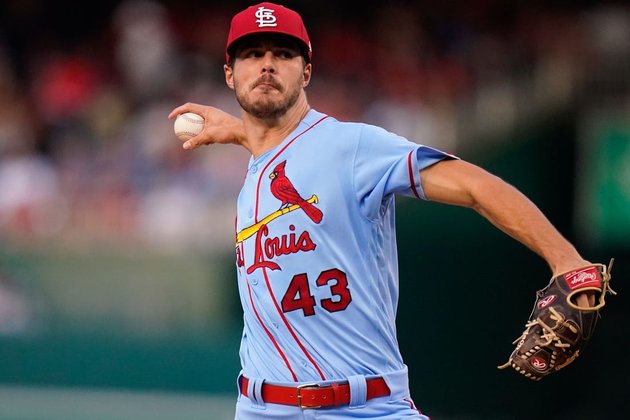 Winners of four games in a row and six of their past seven, the St. Louis Cardinals will try to continue their run when they open a three-game series against the visiting New York Yankees on Friday night.

"It's a long year, right? There's ups and downs for sure," Cardinals outfielder Tyler O'Neill told Bally Sports Midwest after his team completed a three-game sweep of the Chicago Cubs on Thursday. "But we have our best baseball in front of us. So we're just waiting for us all to click at the same time. It's going to be fun."

The Cardinals have climbed into a first-place tie with the Milwaukee Brewers in the National League Central.

"Look at anybody on the club right now -- there's a really good feeling going around," Cardinals manager Oliver Marmol said. "The guys are determined. It'll be a fun little run."

In the series opener, Cardinals right-hander Dakota Hudson (6-6, 4.10 ERA) will try to reverse his recent struggles while trying to come back from Tommy John surgery.

Hudson lasted just 4 1/3 innings in his last start on July 30. He allowed two runs on four hits and two walks in a game the Cardinals lost 7-6 to the Nationals in Washington D.C.

"I feel like this whole season has been experimental to this point," Hudson told the St. Louis Post-Dispatch. "Messing with my arm slot up and down. Messing with my pitch shape and development. So it's been a lot of finding my way back to how I replicate my pitches.

"But I expect myself to be back, if not better than I was previously. It's something that I'm working to get better. That's how I have to view it, to make sure I'm getting after it every day."

The Yankees have the second-most victories in the majors this season with 70, but they have lost three of their last four games and are just 6-8 since the All-Star break.

They fell to the Seattle Mariners 7-3 on Wednesday after starting pitcher Gerrit Cole allowed six runs in the first inning.

"We've got to find a way to -- when you're going through a little struggle -- limit some damage," Yankees manager Aaron Boone said. "That's hurt us from time to time here of late in some of our starts, where those crooked numbers are getting us."

The Yankees will turn to left-hander Nestor Cortes (9-3, 2.53 ERA) on Friday, trying to get their starting pitching back on track. He has allowed just three runs in his last 19 innings covering four appearances, including three starts.

Cortes won his last start against Kansas City 8-2 while allowing the two runs on five hits and two walks on July 30.

"Had a little bit of traffic throughout the game that he was able to navigate, but overall, I thought he threw the ball well," Boone said.