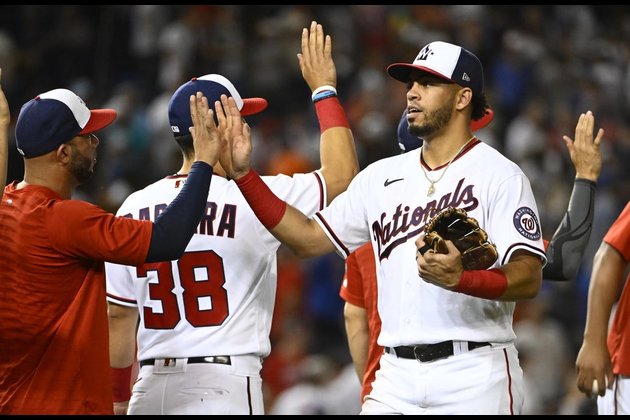 Luis Garcia will look to continue his hot hitting when the Washington Nationals host the New York Mets on Wednesday afternoon with a chance to win the three-game series.

The 22-year-old shortstop, a key component of the Washington rebuild, has hits in six of his last seven games, going 10-for-27 (.370) with two doubles, a triple, two homers, eight RBIs and two runs. Since joining the Nationals on June 1, he is batting .290 and has career highs of 58 hits and 23 RBIs.

Veteran right-hander Anibal Sanchez (0-3, 7.47 ERA) will make his fourth start of the season for Washington. He has allowed five home runs in 15 2/3 innings.

New York was unable to take advantage of a strong season debut by Jacob deGrom on Tuesday and will turn to Chris Bassitt (7-7, 3.83) in the finale.

Bassitt allowed four runs on six hits over six innings of a no-decision the last time out. Before that, he had allowed three earned runs or less in six consecutive starts.

He won his only career start against the Nationals earlier this season when he tossed six scoreless innings on April 9.

DeGrom, who hadn't made a major league start in over a year due to injuries, allowed just a run and three hits over five innings Tuesday night. He struck out six without a walk.

On a day when the Mets did not make a big-name trade, deGrom in effect becomes their biggest addition for the stretch run.

"It was good to see him back out there; it's been a long road for him," manager Buck Showalter said. "Now we have got to stay on that road."

Francisco Lindor homered in his second straight game for Mets and has three homers in his past four games.

New York did acquire two players on Tuesday, sending infielder J.D. Davis and three prospects to the Giants for outfielder Darin Ruf, and acquiring reliever Mychal Givens from the Chicago Cubs for a prospect.

"It stands out that we were able to make our club better today, both offensively and on the run-prevention side," Mets general manager Billy Eppler said. "So I just focus on us. We made the moves that we felt were in the best interest of this organization."