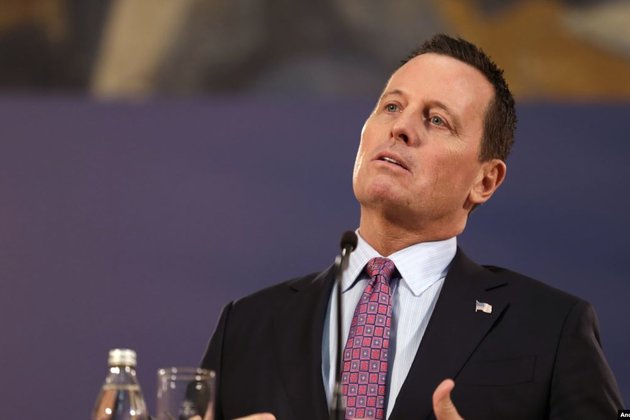 U.S. President Donald Trump has named Richard Grenell, the U.S. ambassador to Germany and special envoy to Serbia and Kosovo, to become the acting director of national intelligence, a move immediately blasted by critics.

'Rick has represented our Country exceedingly well and I look forward to working with him,' Trump wrote on Twitter on February 19 about one of his strongest supporters.

The post of director of national intelligence (DNI) was created after the September 11, 2001, terror attacks on the United States. It oversees the 17 U.S. civilian and military intelligence agencies, including the Central Intelligence Agency (CIA).

Critics assailed the appointment of Grenell as an acting director -- meaning he will not require Senate approval -- and for his perceived lack of experience in intelligence matters.

Senator Mark Warner, the top Democrat on the Senate Intelligence Committee, said the move was apparently 'an effort to sidestep the Senate's constitutional authority to advise and consent on such critical national security positions.'

Warner also said that 'the president has selected an individual without any intelligence experience to serve as the leader of the nation's intelligence community in an acting capacity.'

Grenell, a vocal supporter of Trump's policies, replaces Joseph Maguire, who had served as acting DNI since August.

Maguire was named to the post following Dan Coats' resignation as director.

Trump had a strained relationship with Coats, who had supported the U.S. intelligence community's conclusion that Russia interfered in the 2016 presidential election with the goal of promoting Trump over Democratic rival Hillary Clinton.

Grenell, who served as the U.S. spokesman at the United Nations during the administration of President George W. Bush, has been known as a controversial figure.

In 2018, Germany asked Washington to clarify remarks Grenell made to a right-wing website saying he wanted to empower "other conservatives" in Europe.

He has also vocally criticized Berlin for what he has seen as a lack of support for Washington's tough stand against Iran, made controversial statements about Germany's domestic policies, and made other critical comments that were seen as unusual for an ambassador to a long-standing U.S. ally.

In October 2019, Trump named Grenell to become Washington's special envoy for negotiations between Serbia and Kosovo, acting in the role concurrently with his post as ambassador to Berlin.

Trump has hailed his role in helping the two Western Balkan rivals to restore air and rail links in recent months.

During a signing ceremony marking the restored ties on February 14 on the sidelines of the Munich Security Conference, Serbian President Aleksandar Vucic praised Trump and Grenell for helping to reach an agreement that he said will 'ensure peace for future decades.'

With reporting by Reuters, AFP, AP, dpa, and The New York Times

Reuters suspended from Iraq after story on Covid-19 cases

Time for U.S. to stop plutocrats from directing public policy?

The novel coronavirus is quickly exposing the deadly dysfunction of our national government, which we can all now see represents ...

Paris [France], Apr 3 (Sputnik/ANI): As many as 471 people have died in French hospitals from the coronavirus over the ...

A staggering 10 million US workers have lost their jobs in the second half of March as the coronavirus forced ...

The interruption to the 2020 NASCAR season due to the COVID-19 pandemic has been understandably disappointing and disconcerting for racers, ...

The global death toll from the coronavirus pandemic topped 50,000 on Thursday.The number of deaths continued to soar in Italy, ...

Time for U.S. to stop plutocrats from directing public policy?

The novel coronavirus is quickly exposing the deadly dysfunction of our national government, which we can all now see represents ...

NEW YORK, New York - A streak of 113 consecutive months of jobs growth came to an end with data ...

Healthcare for everyone in America needs to be free

Access to COVID-19 treatment is key to helping Americans combat the disease, as well as containing its spread. To their ...

NEW YORK - New York's governor said Thursday that his state has enough ventilators to last about a week, as ...

WASHINGTON, DC - A staggering 10 million US workers have lost their jobs in the second half of March as ...

WASHINGTON, DC - The U.S. Navy is evacuating thousands of sailors from the nuclear-powered aircraft carrier USS Theodore Roosevelt in ...